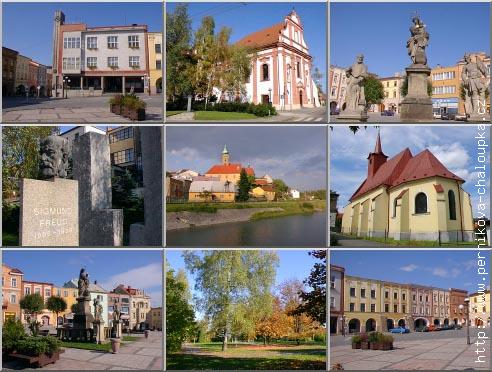 The town of Příbor is one of the oldest towns in the northeastern Moravia. It stretches along both banks of the Lubina River. At three sides, it is surrounded with a beautiful scenery of the Beskydy Mountains foothills including a view of the Štramberská Trúba Castle, the Hukvaldy Castle and the famed Radhošt Mountain. The town can boast of its rich history.

An important chapter in the town history is formed by schools and education. In this field, the founding of a Piarist grammar school, in 1694, meant a great benefit. Owing to the arrival of Piarists, a large expansion in education had started in the town so that pupils of rather poor social classes were able to obtain secondary education. A primary parish school had already been in the town since 1541. Due to the founding of the Czech Teacher's Institute, in 1875, the town became a centre of education in the northeast Moravia. Within the existence of the institute, by 1938, many important teachers and experts in education and culture graduated from it. Příbor was rightly called the Moravian Litomyšl.

The town belonged to the Olomouc Bishopric and the Bishops looked with favour upon the town. Cardinal František Dietrichstein, who improved the town emblem and granted the town many privileges and rights, was among them in particular. His emblem is still placed on the house No. 6 in the Sigmund Freud's Square, where he used to stay when in the town. Příbor has been a hometown and base to important personalities who had made it famous. St John Sarcander, together with his mother, lived in the town and attended the parish school. Antonín Cyril Stojan, who became Archibishop later, attended the grammar school first and worked as a chaplain there for 11 years then. In addition, the following personalities were born in the town: Řehoř Wolný - a historian and the founder of the Moravian topography-, Bonifác Buzek - a philosopher and national awakener-, Sigmund Freud - the founder of psychoanalysis and honorary resident of the town of Příbor-, František Juraň - an academic sculptor-, Josef Kresta - a writer and other personalities.

THERE ARE ABOUT VILLAGE OR TOWN/CITY